Mission San Juan Capistrano was founded by Father Junípero Serra, a priest in the Franciscan order of the Catholic Church on behalf of Spain. “California’s cattle industry began in 1769 when Captain Gaspar de Portola and his group of missionaries and soldiers brought 200 head of cattle to the area, and by 1863, approximately three million cattle were grazing on the hills of California.”

Mexico won its independence from Spain in 1821. California became Mexican territory and many rancheros were formed in Southern California, including Rancho Niguel.

In 1848, The Treaty of Guadalupe Hidalgo was signed with Mexican government that ended the war. The California Gold Rush (1848–1855) began on January 24, 1848, when gold was found by James W. Marshall at Sutter’s Mill. California became the 31st state on September 9, 1850

Lewis Fenno Moulton (1854-1938) arrives at Rancho San Joaquin (Irvine Ranch) at twenty years old. Louise Moulton Hanson shared, “He got a job on the San Joaquin ranch working under Charles French. He and Mr. French bought a flock of sheep, and my father eventually bought out Mr. French. He ran his sheep on rented land from Oceanside to Wilmington.”

Lewis forms the L. F. Moulton and Co. from Rancho Niguel with Basque partner, Jean Pierre Daguerre to run the 21,723 acres. Lewis bought out his partner and renamed this operation Moulton Ranch. This encompasses what is now Laguna Niguel, Aliso Viejo, Laguna Woods and Laguna Hills.

January 17, 1854– Lewis Fenno Moulton was born in Chicago, Illinois to John Tildon Moulton, his Harvard educated lawyer father, who was one of the first editors of the Chicago Tribune and mother Charlotte (Harding) Hiller Moulton of Maine.

1869-1872- Lewis is fifteen years old and worked on the Daniel Webster farm in Massachusetts for three years.

1874- Lewis Fenno Moulton (1854-1938) journeys to California via the Pacific Mail steamer. According to Nellie, “to the port of San Francisco – south on another smaller board to finally arrive at Anaheim Landing, near the now city of Los Angeles.” According to Louise Hanson, “When he was twenty years old, my father took a boat to the Isthmus of Panama, crossed by train, and took another boat to San Francisco. He wasn’t too happy there, so he took a boat to Wilmington, California, then a stagecoach to Santa Ana.” Lewis arrives at Rancho San Joaquin (Irvine Ranch) and learns to sheep-heard. Louise shared, “He got a job on the San Joaquin ranch working under Charles French. He and Mr. French bought a flock of sheep, and my father eventually bought out Mr. French. He ran his sheep on rented land from Oceanside to Wilmington.” Nellie shared “he was hired on the spot at $35 a month and keep.”

1874- Jean Pierre Daguerre (1896-1911) , a Basque sheepherder from the French region, arrives in the United States. “In 1874 Jean Pierre Daguerre came from Basque country in Europe, and was employed in the sheep business. After a few years he went into the sheep business for himself.” Domingo Amestoy, who owned the Rosecrans Rancho in Gardena offered Daguerre a sheep-herding job. “Here he was employed with the Amestoys in the care of their stock, so became thoroughly experienced in this work, continuing with them for eight years, when he resigned to begin stock raising on his own account. Making his way to San Juan Capistrano he formed a partnership with Don Marco Forster as sheep growers. After his marriage Mr. Daguerre and his wife went to El Toro, where he continued actively in the sheep business for several years. After dissolving partnership with Don Marco Forster, Mr. Daguerre formed a partnership with Mr. Lewis F. Moulton on his extensive ranch of 22.000 acres, the business being conducted under the name of Lewis F. Moulton and Company.”

December 8, 1878- Nellie Gail Moulton was born in Irving, Kansas to John Lockwood Gail (1848–1926) and Prudence Adelia Stoneman Gail (1853–1894). She grew up in Nebraska. “Nellie Maud Gail was born in 1879 in Kansas. She appeared in the 1880 census with her family in Marshall County, in the northeastern part of the state. Her parents, natives of Illinois, may have relocated to Nebraska at some point in time as that state is sometimes cited as her birthplace.”

1894- Nellie Gail moves to California at the age of sixteen years old and attends Citrus [Union] High School in modern day city of Glendora for two years which was the “first to be built in the San Gabriel Valley, between Covina, Glendora and Azusa.” She recalled seeing the ranch “when she drove in a horse and buggy in 1894 from El Camino Real at El Toro through Laguna Canyon and then to the sea.” Nellie recalled in an 1957 interview that, “two other young ladies and I drove to and from school in a surrey with a fringe on top.” According to a 1968 interview, “Event as a young girl, when her father lived near El Toro and often brought her to Laguna Beach, she loved painting what she saw here, the hills and sea.”

1895- Judge Richard Egan, of San Juan Capistrano, writes to Lewis on June 15, 1895 regarding the ranch boundaries. He was a lifetime member of The Landmarks Club with Don Marcos Forster and Chas. F. Lummis (1859-1928), an author and President of the organization. He is mentioned in the 1903 edition of Out West Magazine, Volume 18, which promoted the California mission system for tourism.

February 1895—  Lewis Moulton buys Rancho Niguel and other properties from Rawsons (Rawson Deed of Trust, 1899-09, 2017.15.05) Louise stated ”In February 1895, Father purchased Rawson’s 17,000 acres. A few months later Mr. Daguerre bought a one-third interest in it.” “Niguel was sold by the grantee to C. B. Rawson and sold by him to Lewis F. Moulton. The original grant was patented for 13,316.01 acres but the ranch has been enlarged by purchase until it now has an acreage of about 22,000 acres.” L.F. Moulton and J. P. Daguerre become partners of the L. F. Moulton and Company/ Lewis Moulton and Company Ranch (Niguel Ranch/Moulton Ranch)/ Lewis F. Moulton and Company of nearly 22,000 acres (21,723) composed of modern Lake Forest (El Toro), Laguna Hills, Laguna Woods, Aliso Viejo, and Laguna Niguel. This land could also be defined from El Camino Real to the Pacific Ocean at Monarch Bay. Cattle camp was at Monarch Bay. The corrals were located in Aliso Canyon.

1896- Nellie Gail graduates from high school as the valedictorian in Hebron, Nebraska. Nellie stated, “Back to Hebron and to continue by highschool studies. It was here I graduated. They year, 1896.” (38) She visited Coronado Hotel with Alta and titled her valedictorian essay, “A Visit to the Coronado Hotel in San Diego, California.” She desired to attend University of Lincoln, but enrolled in Seminary for a year for additional credits.

1898- Lawrence Fenno, Lewis’ Boston cousin of Fenno Brothers & Childs, wrote to Lewis about a large drought in region since 1877.

1903- “Si” Salustiano Sansinena, a Spanish Basque, arrived on the ranch as a sheepherder and became the foreman. 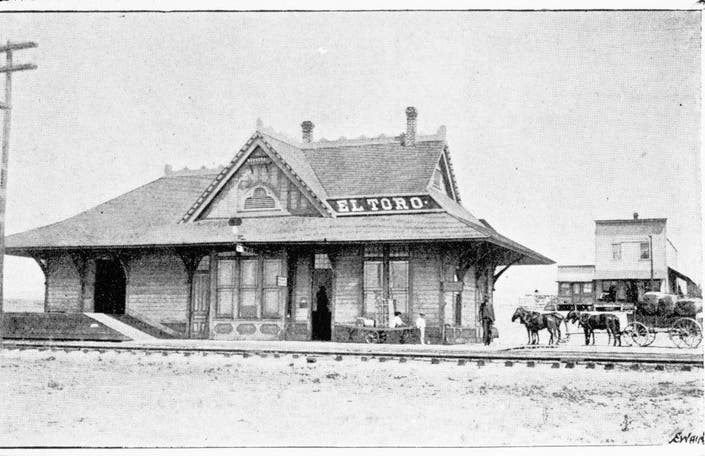 1903 – Nellie visited her father, John Lockwood Gail who is postmaster of the El Toro Post Office and is compensated at $377.90 according to the Official Register of the United States. He owned the El Toro Mercantile Store, later the El Toro Country Store, that was located on the north side of El Toro Road near the intersection of the railroad tracks.

1905 – Mr. Moulton asked John Gail, postmaster in El Toro, permission to call on Nellie during a trip to Boston on his way home. He visited Nellie in Seattle. They went on dates and saw the play likely on October 9, 1905 opening of Ben Hur in box seats at the Grand Opera House in Seattle.

November 28, 1908 -54 year old Lewis and 29 year old Nellie Gail married in Camarillo and had a honeymoon in Hawaii.

Nellie shared, “Our house, still standing at El Toro and now the home of daughter, Charlotte, was being built while we were away.” (75) The Moulton Ranch House was in the Oakbrooke Village in Laguna Hills. It would have been near the fronting I-5 on the south side of Laguna Hills Mall.

December 30, 1914–Louise Marie Moulton was born to Nellie Moulton at 36 years old and Lewis at 60 years old in El Toro at the Moulton Ranch.

1938-1950- Nellie Gail Moulton runs Moulton Ranch. “Once more I found myself working in an office. With the help of Josephine, another of Mr. DeGuerre’s [sic] daughters, I took on the management of the ranch. I did this for twelve years.” (79-80)

1954- Daguerre’s sold their ranch interest which became the city of Laguna Niguel and the audit report shifted from L. F. Moulton to Moulton Ranch Co.

1957- Nellie Gail Moulton resides at Three Arch Bay in Laguna Beach. The ranch is “eleven thousand acres are used for cattle grazing and about 3000 acres are under cultivation to barley and sudan glass. The latter is used for summer feed for the herds.”

1959- The construction of the San Diego, I-5, Freeway in 1959 allowed more people to arrive. The first communities developed in Laguna Niguel were right along the coast, touching the southern border of Laguna Beach. These communities were called Monarch Bay and Monarch Bay Terrace built between 1960 and 1962.

1960- Moulton-Niguel Water District is created by a conglomerate. Glenn Mathis was a founding member of the El Toro Water District board. Also serving on the MNWD board were Louise (Moulton) Wineman and Ivar Hanson.

December 4, 1968 – “Be Honored On 90th Birthday” article written by Elizabeth Rogers states that Nellie Gail Moulton was “Laguna’s Women of the Year” by the local Business and Professional Women’s Club.

1969- Moulton Theatre opens at Laguna Playhouse which was designed by a family friend, William L. Pereira & Associates Planning & Architecture. “In 1969 the Moulton Theatre was built along Laguna Canyon Road through private funds replacing the original playhouse, which was eventually demolished”

October 1, 1976- “Moulton Ranch: Sold Out” article is published in the LA Times. The Moulton family members, Charlotte and Louise, sell their ranch interests to developers who purchased 6,600 acres to create the planned community of Aliso Viejo with 20,000 homes for a planned population of 50,000. Mission Viejo Company was under the leadership of Philip J. Reiley, President at the time of purchase.

1993- Louise Hanson was named the Santa Barbara County Cattle Producer of the Year.

2006- Charlotte Mathis passes away at 96 and her obituary was published in the OC Register.

2014 – Louise Hanson passes away at 99 years old in Santa Barbara county at her ranch in Lompoc. She moved there with her husband Ivar in the 1970s.