By MARRIE STONE for the Stu News Laguna

Orange County locals are likely familiar with the Nellie Gail name, most commonly associated with the community of ranch-style and equestrian homes located in Laguna Hills. Perhaps some will recognize Nellie Gail Moulton as the wife of Lewis Moulton, who acquired nearly 22,000 acres of Orange County ranch land in the late 19th and early 20th century (including the land of Rancho Niguel). Local Laguna art students might know her as the founder of the Laguna College of Art + Design (LCAD) in 1961, or one of the founding members of the Laguna Beach Art Association in 1918. But it’s her work as an accomplished plein air artist that the LCAD Gallery is celebrating through the next month. 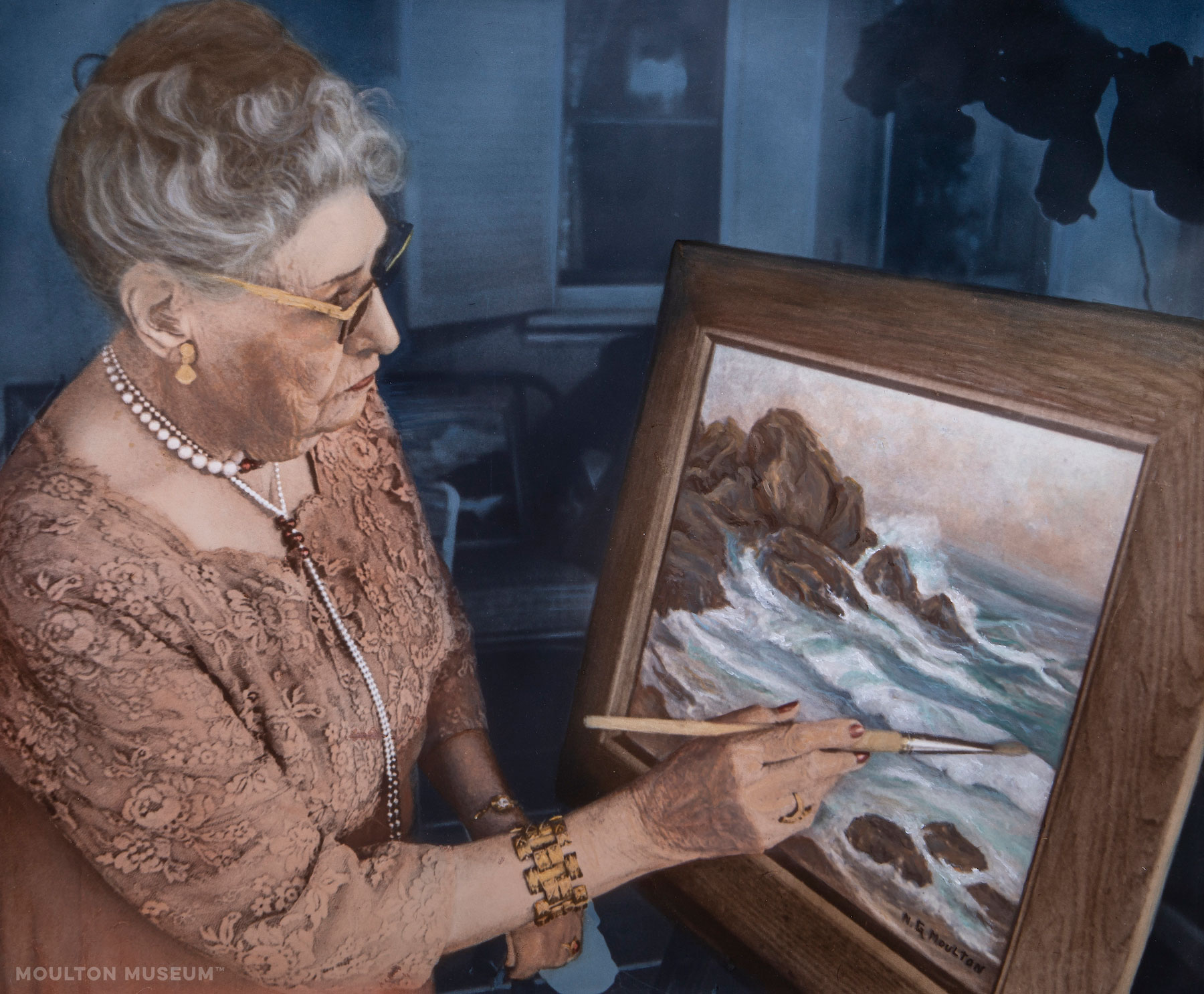 Portrait of Nellie Gail Moulton with California Seascape (circa 1968). Photo print with hand-painted elements, obtained from a collection of Chapman University.

To commemorate the exhibition’s opening, two of Nellie Gail Moulton’s descendants – Jared Mathis and Scott Barnes – attended the reception and shared their thoughts on their great-grandmother’s work, including one incredible story about how they obtained one of her lost paintings.

We spent some time with historians and archivists from the Moulton Museum, as well as the curators of the exhibition and Moulton’s own heirs, to learn more about the artist’s life, influences, mentors and passions. 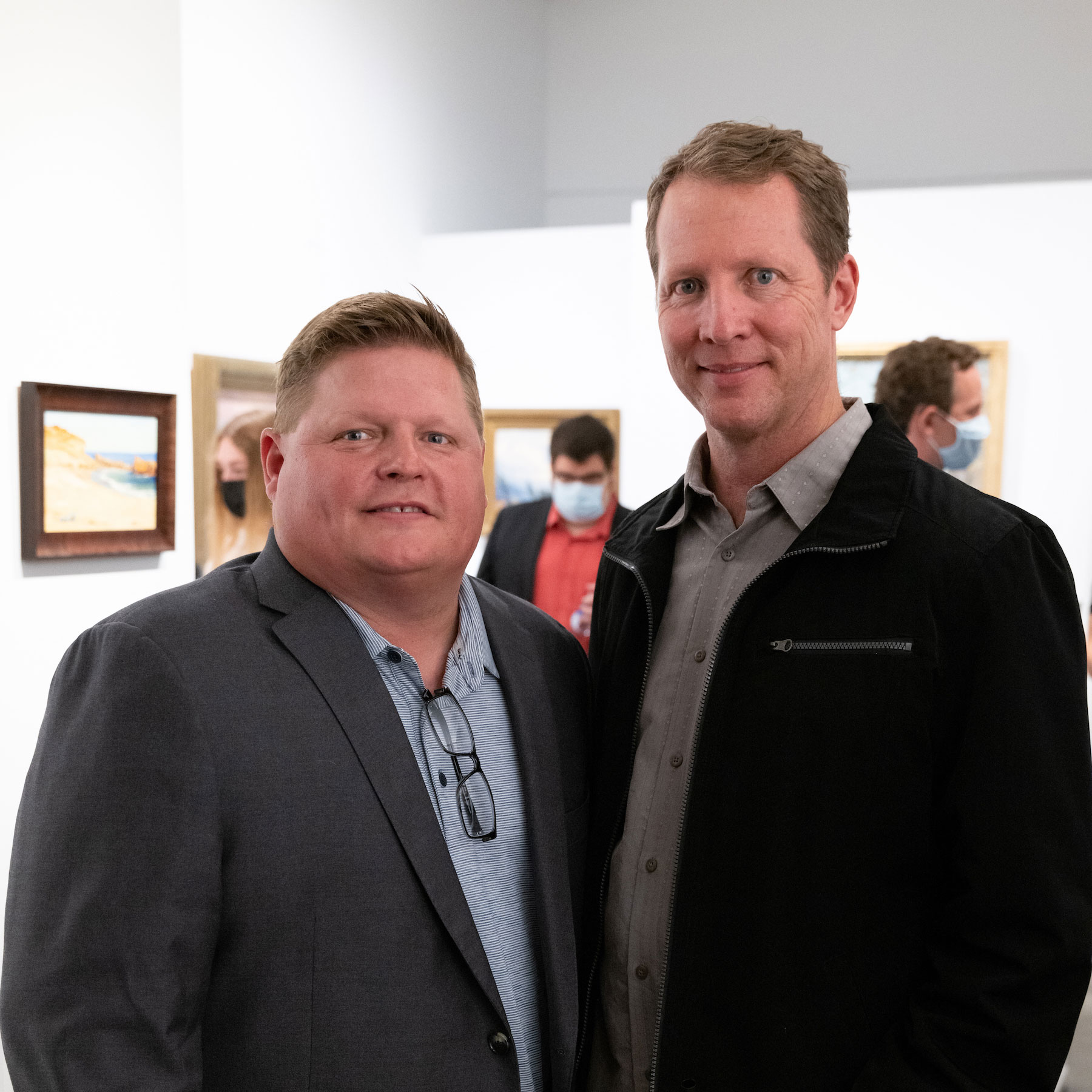 In addition to being treated to Moulton’s artistic talent, the retrospective provides an opportunity to step back in time and glimpse Orange County’s landscapes and seascapes as they existed in the early to mid-20th century. The recent past feels far removed, but the exhibition is a reminder that it wasn’t so long ago.

The early years before plein air

Neither a native to the art world, nor Southern California, Nellie Gail came to both on her own volition and embraced them with enthusiasm. Born in Kansas in 1878, she obtained her teaching credential in 1900. But by the age of 15, she already showed a keen interest in art. A piece produced during her adolescence was shown in the children’s center of the 1893 Chicago World’s Fair. Gail’s earliest known existing work, produced in her early ‘20s, is a painting now titled, “Roses with Bees” (circa 1900). 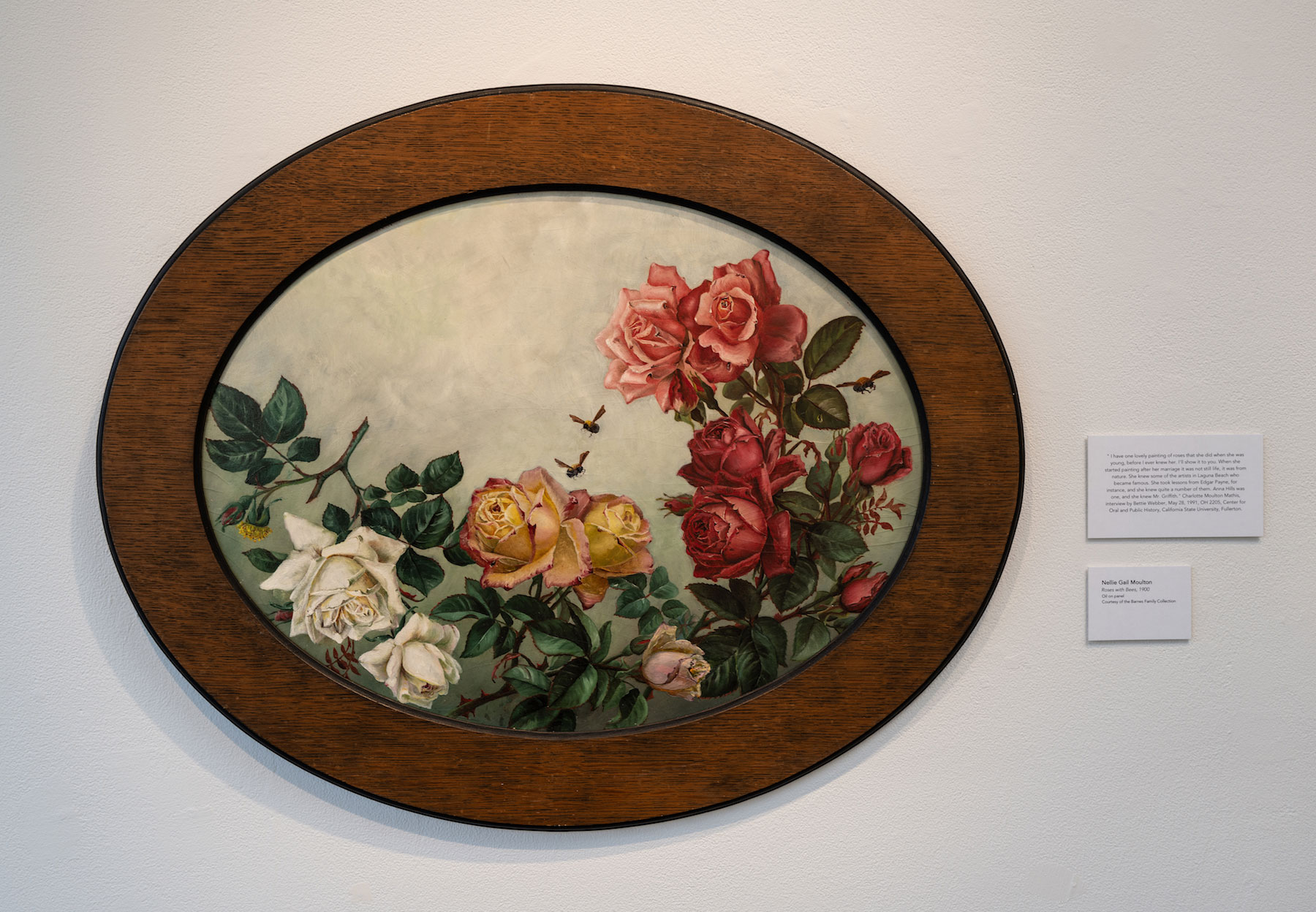 “Roses with Bees” (circa 1900) was provided by the Barnes Family Collection. Charlotte Moulton Mathis, Nellie’s daughter, reported it was one of the only paintings she still possessed from her mother’s early years.

“It’s an intriguing piece because it’s so different from her other subject matter,” said Jennifer Keil, historian at the Moulton Museum. “It focuses on a closer perspective and homes in on a small landscape.”

While her passion for art – and plein air painting in particular – may have consumed Nellie Gail, she also held a deep commitment to education, spending her early adulthood as a teacher and school principal in Seattle, WA. 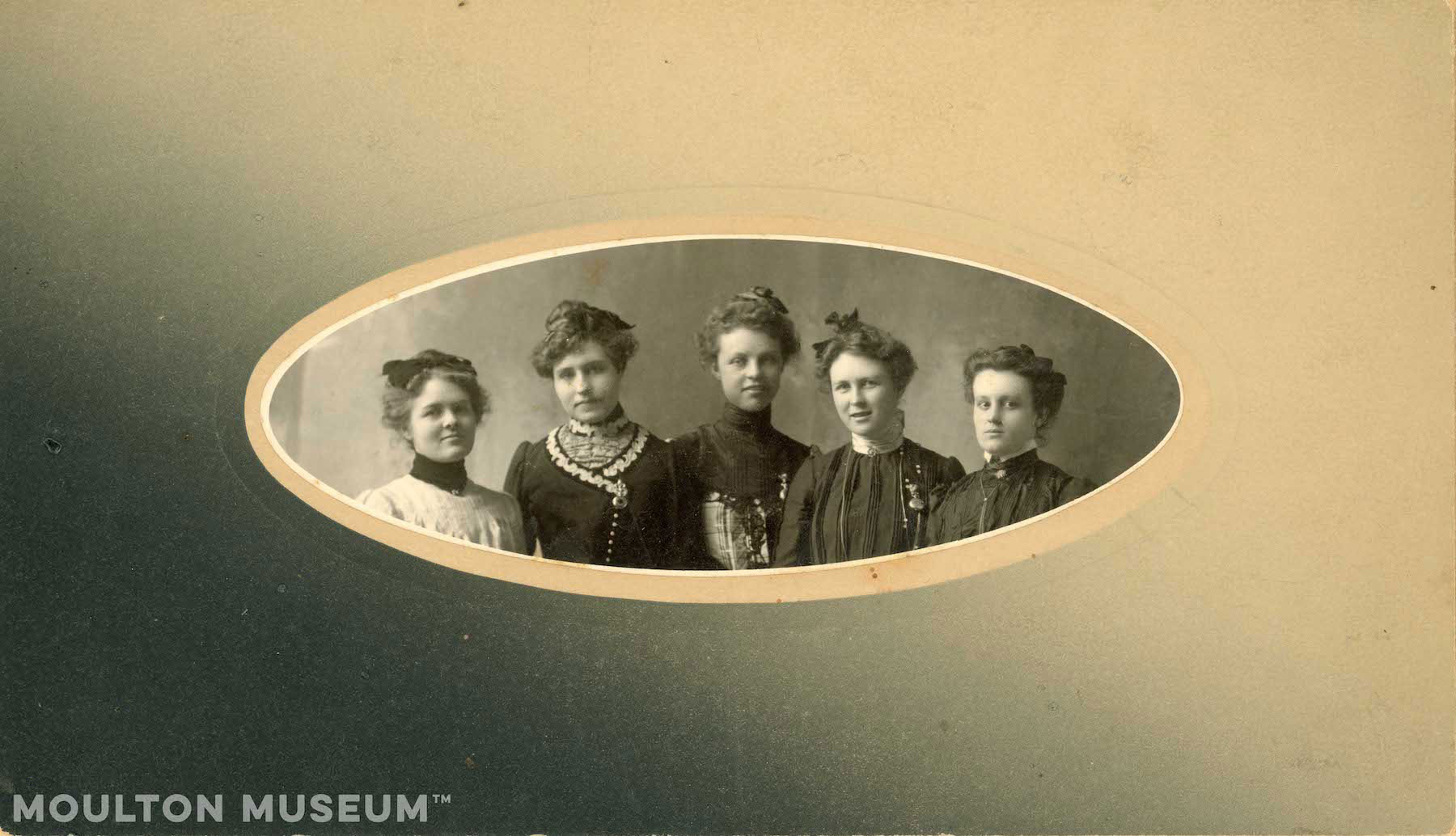 Five women, including Nellie Gail Moulton who is second from the left

But after moving the family to Seattle, Nellie’s father took a position as postmaster at the El Toro General Store in Southern California. Nellie visited him there shortly after his move, a trip that would change the trajectory of her life.

“Her father was receiving all the town’s mail and hearing every latest update,” said Keil. “He had a chance to introduce his lovely, eligible daughter to a Mr. Moulton, who was quite distinguished and – at this point in 1903 – had a successful career with Moulton Ranch.”

Mr. Moulton, being a formal and well-heeled gentleman, asked Nellie’s father for permission to court his daughter. He called on her and visited her in Seattle throughout their five-year courtship. Nellie reported falling madly in love with the man who was close to her father’s age. The two were married in 1908 and Nellie Gail Moulton would spend the remainder of her 93 years living in Orange County. 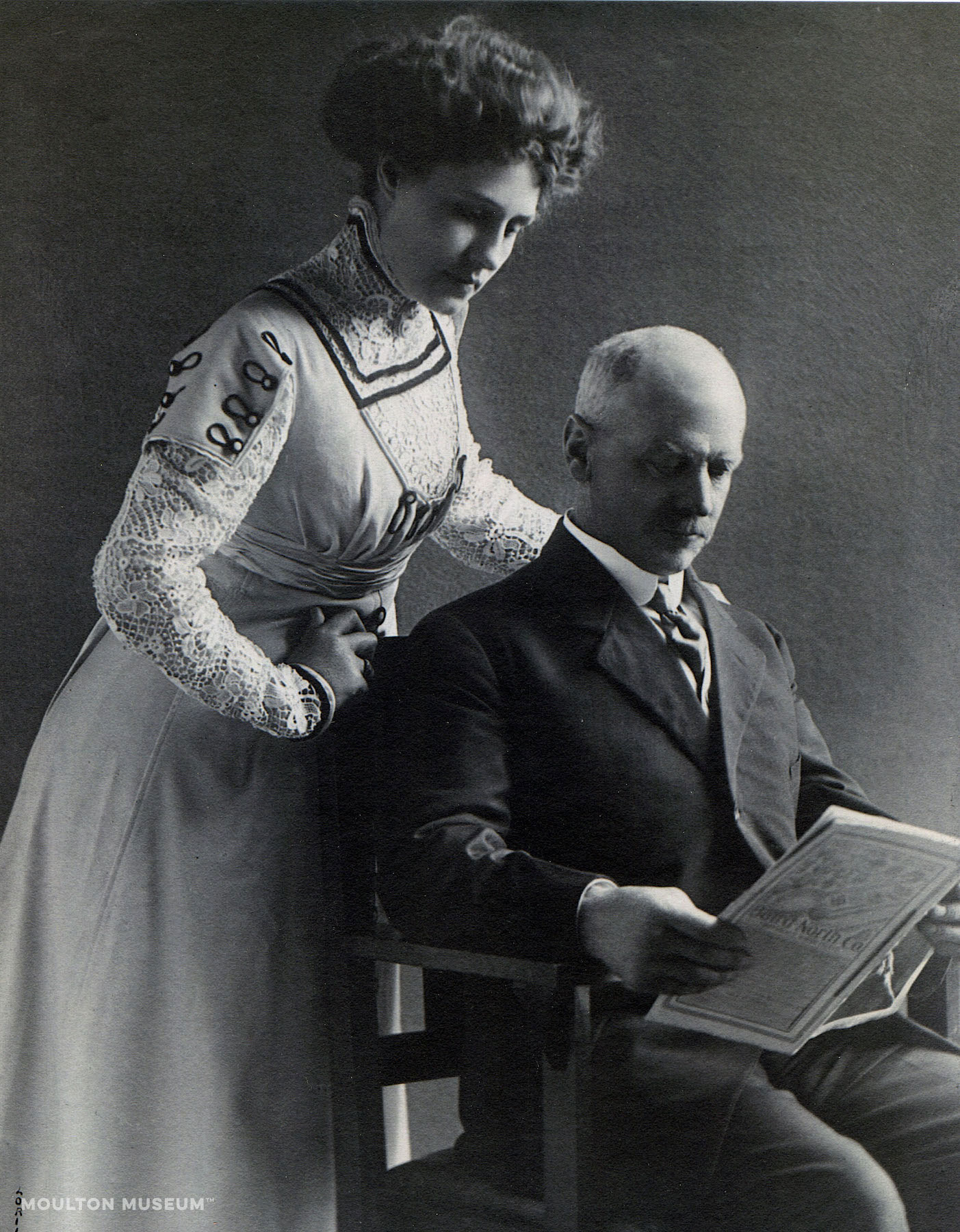 “She hated the landscape of Southern California at first,” local curator, writer and art historian Evan Senn told Orange Coast Magazine last year. “Having spent so much time in Washington, she loved the lush green vegetation of the Pacific Northwest and thought that California’s brown grass hills were not impressive. However, her artwork would tell us another side to that story, one that shows us she fell in love with the California coast.”

Learning alongside the masters

After the birth of their two daughters – Charlotte (1910) and Louise (1914) – Nellie Gail Moulton began participating in Laguna’s local art culture in a significant way. As a charter member of the Laguna Beach Art Association, founded in 1918, the Moultons began fundraising efforts for what would eventually become the Laguna Art Museum. 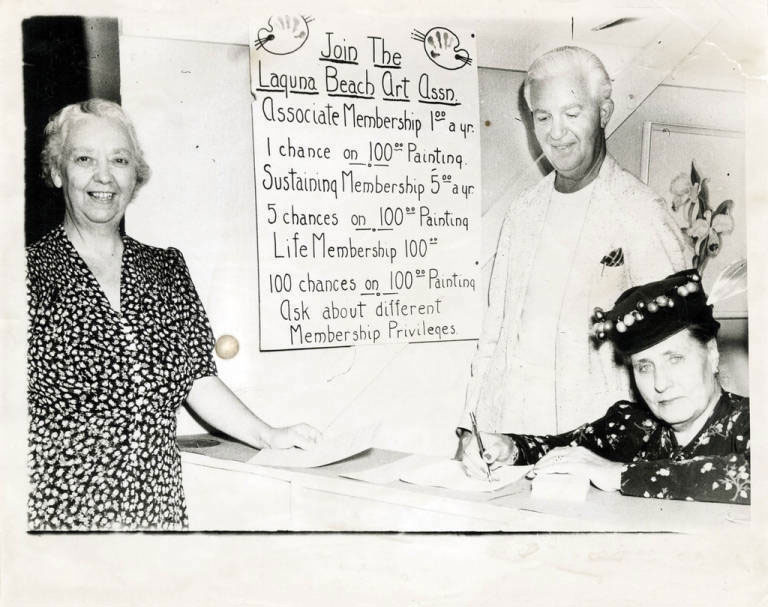 Photo courtesy of the Moulton Museum

By the time her daughters were grown, Moulton was studying plein air painting in earnest. Perhaps knowing her commitment to education and teaching, it’s no surprise to discover that Moulton was a lifelong student of the arts. Although she received no formal artistic training, she studied with the most notable 20th century impressionist painters in Southern California – Edgar Payne, Anna Hills, Frank Cuprien, Bennett Bradbury and William Wendt.

“The LCAD exhibition also showcases paintings by Hills, Wendt, Cuprien and Payne – alongside Moulton’s pieces – to guide the public through this point of view of mentee working alongside the master,” said Keil. “We’re also showcasing the different methods used in impressionism. Moulton’s various techniques appear alongside whomever she’s studying. For example, you can see her use of palette knives versus brushes.”

Viewers will also see Moulton’s attempts to imitate her masters’ subject matter and form. Moulton’s paintings of lush green rolling hills are indicative of her work with Wendt. “Look for her use of ‘Wendt green’ [artists often refer to this color that Wendt stylized]. You can see her mixing that color tone in her work,” said Keil. “Then she does these amazing strokes of trees, these beautiful eucalyptus trees that were a common subject matter at the time.” 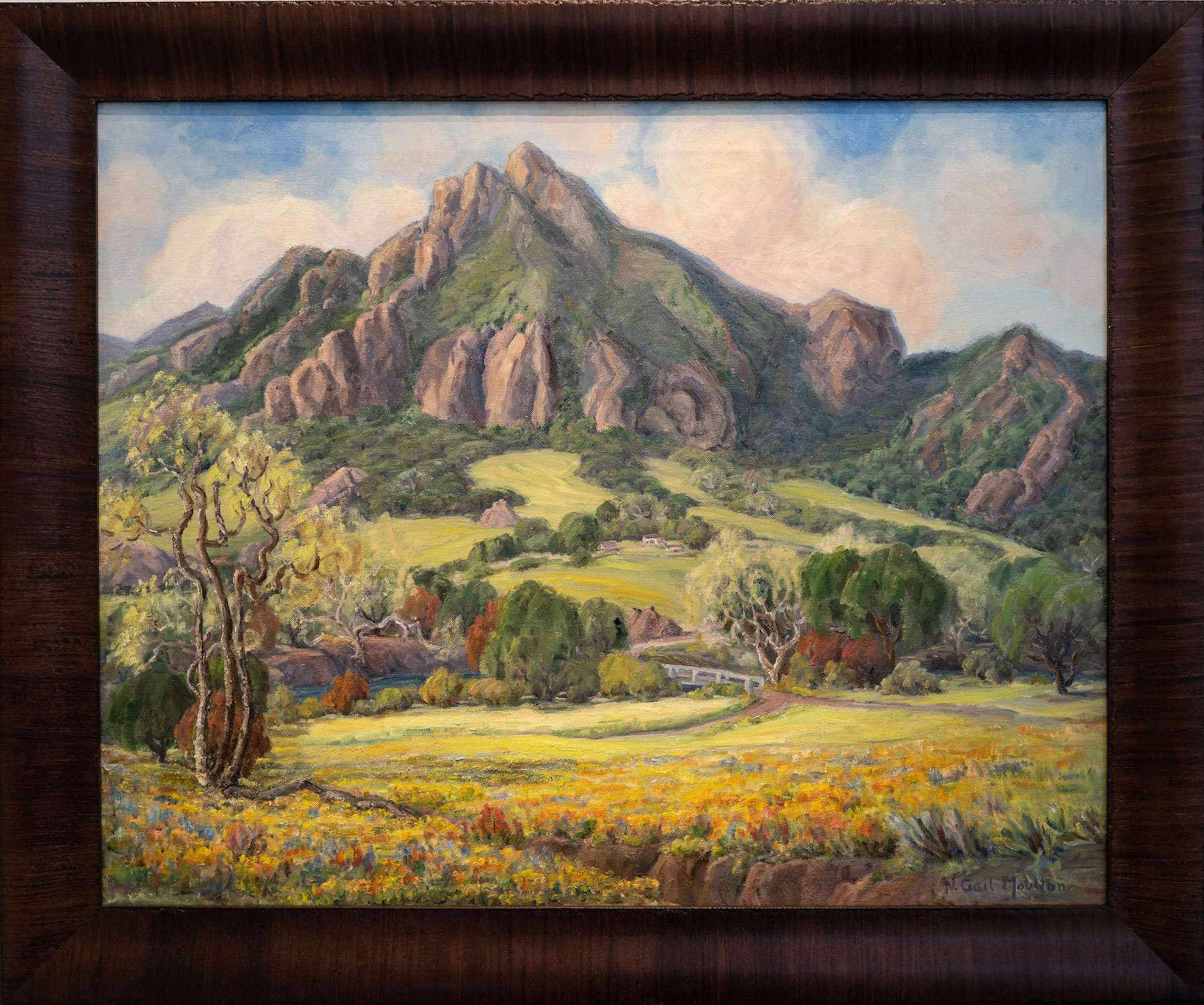 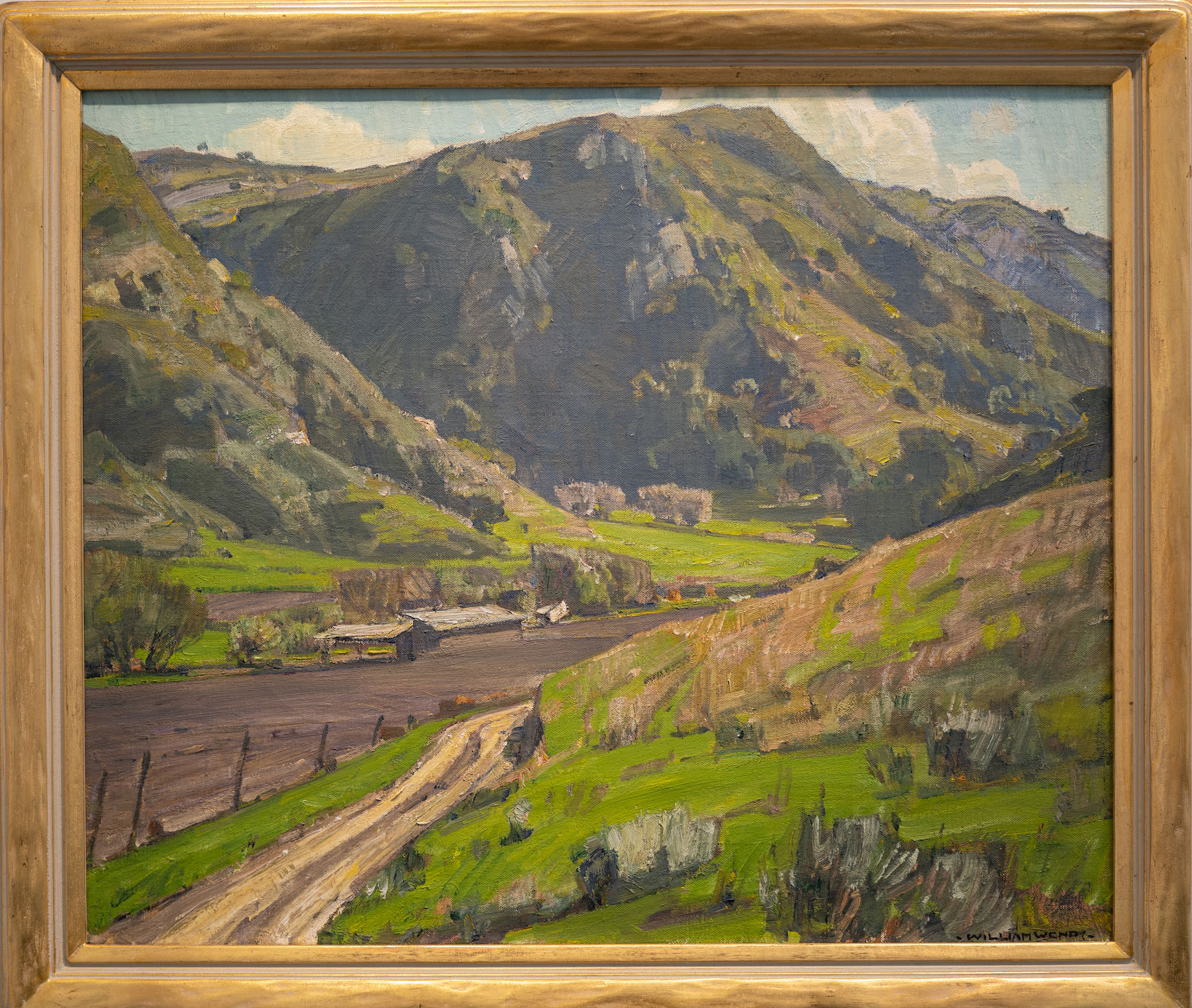 “Road through the Ranch” by William Wendt

Then there are Moulton’s seascape paintings that are imitative of Cuprien’s style, who is known for being the master of light. “Cuprien captures sunsets and the shoreline,” said Keil. “He was able to depict that glimmer of sun as it speeds into the ocean. You can see Moulton trying that same technique in some of her seascapes.”

Moulton traveled with these masters to Yosemite National Park, the Grand Canyon and other destinations, studying their techniques along the way. “It was an adventure as much as it was a learning experience,” said Keil. 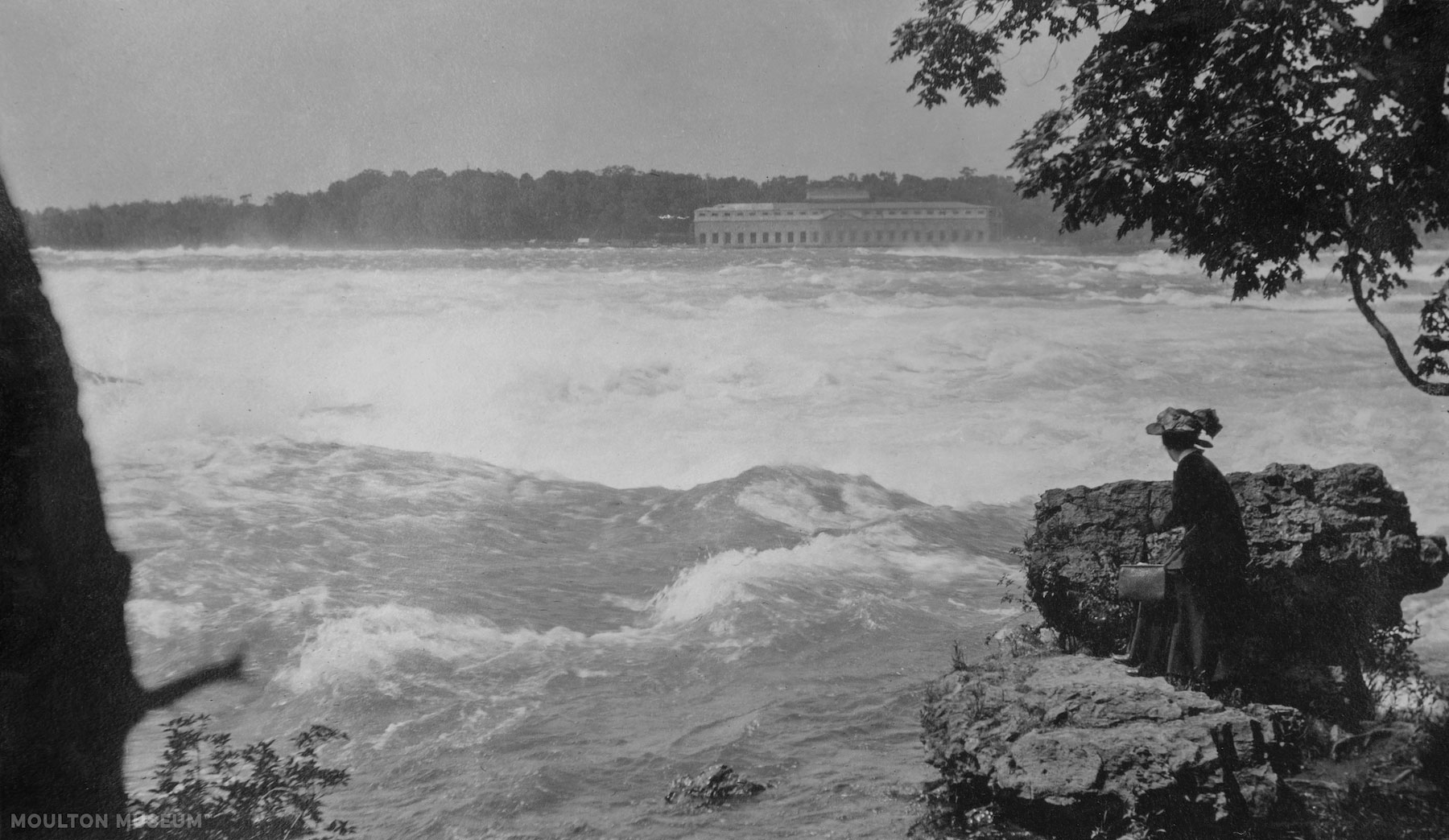 Many of Moulton’s works date from the 1930s and ‘40s. She showed her work in the Laguna Beach Festival of Arts in 1938. This period of time seems to be the height of her productivity, but she painted well into her elderly years.

“She starts early,” said Keil. “Art remains one of her favorite pastimes until her later years. And she’s prolific to the point that we have identified more than 120 pieces of her work – from miniatures to large canvases.”

The exhibition at LCAD not only showcases some of Moulton’s strongest works alongside those of her mentors, but it also includes her sketches and drawings, which allow access to her artistic thought process and the development of her style. 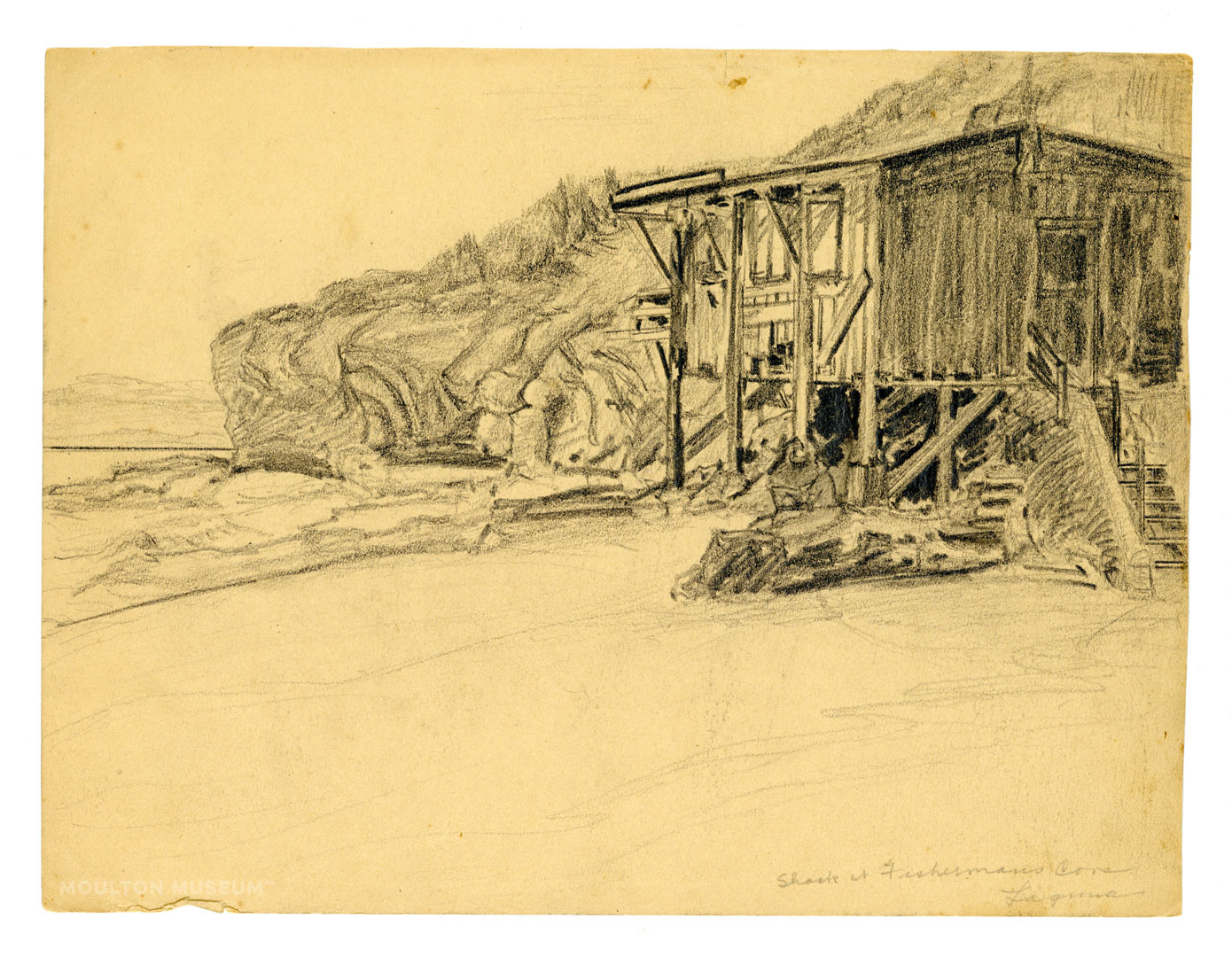 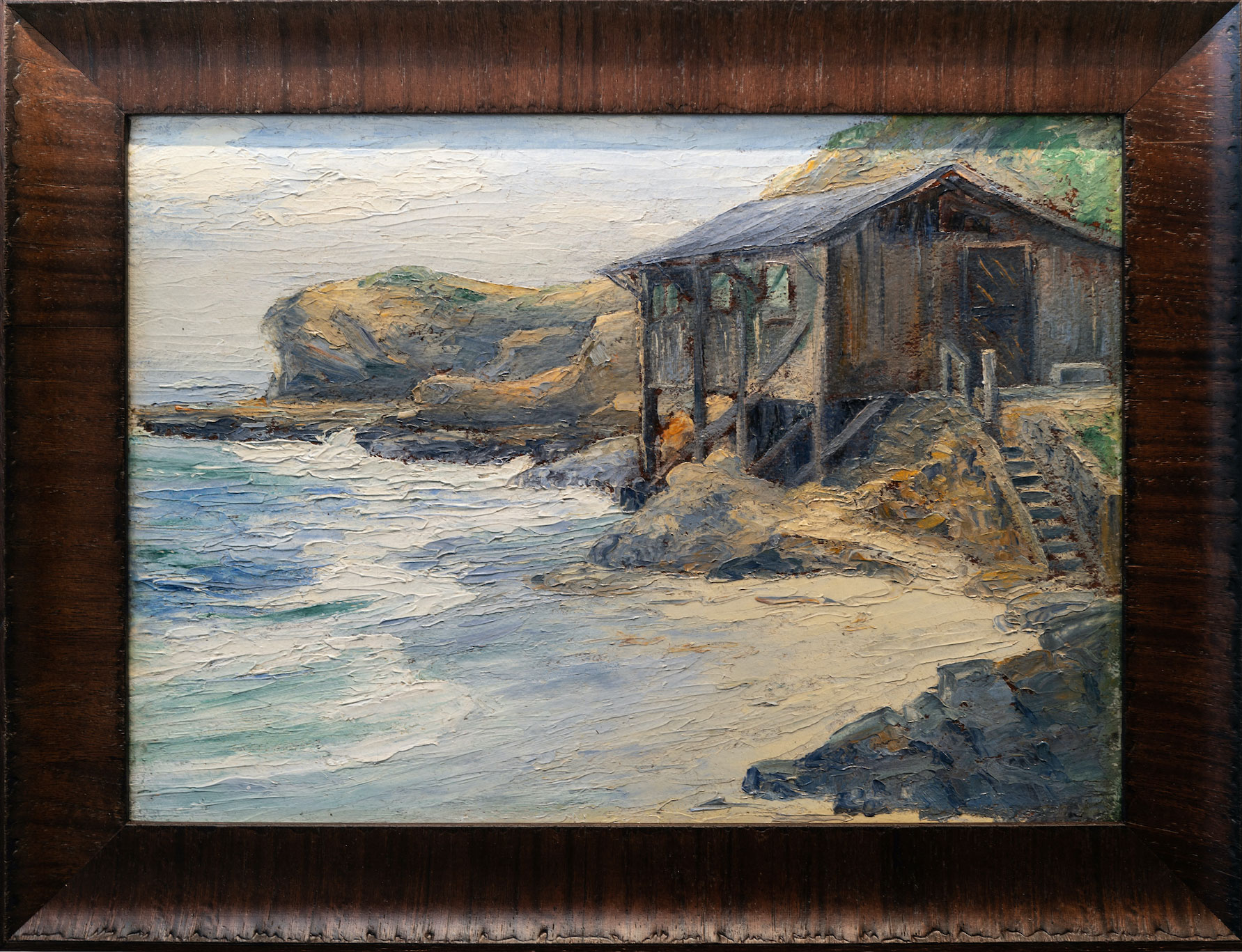 “Her graphite sketches emphasize her technique and her ability to capture a region and translate that onto a canvas using oil,” said Keil. “We love the sketches as their own body of work to showcase her abilities.”

“I would have loved to see more of her writings,” said Bryan Heggie, gallery and collections manager at LCAD. “My goal was to get inside her head as an artist and showcase Nellie Gail Moulton not as the wealthy woman who started these institutions, but as Nellie Gail Moulton the artist.” 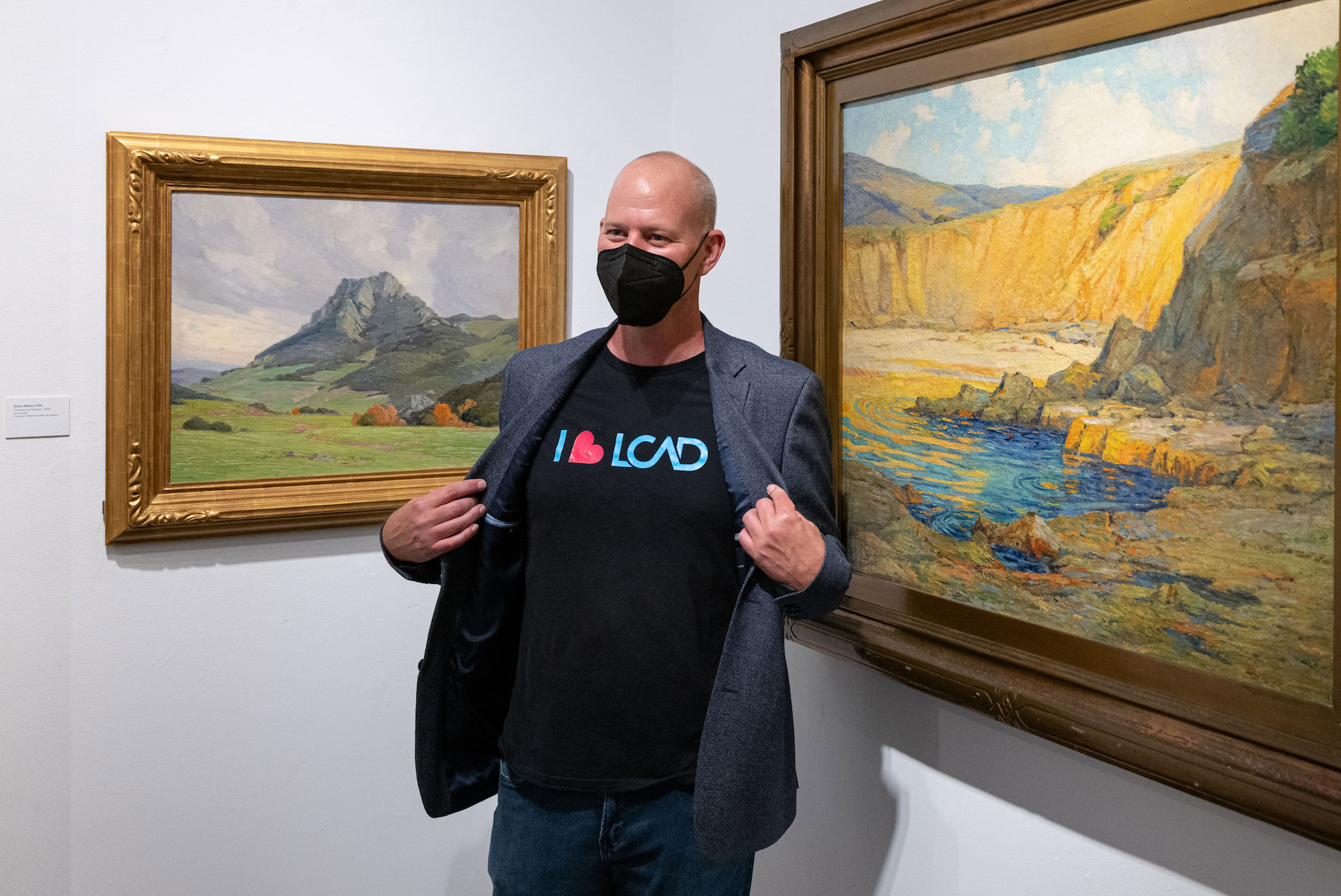 Bryan Heggie, curator of the exhibition, poses with Anna Althea Hills’ “Threatening Weather” (circa 1926, left) and “Blue and Gold”

“That’s why the sketches are so important,” said Heggie. “Because they give an insight into her thought process. That’s what started the exhibition. I saw those sketches and realized we had an educational show. It allows the viewer to get into the mind of the artist a little more.”

“Seeing her process, looking at her sketches and drawings as they turn into artwork, is wonderful,” said Jared Mathis, president of Moulton Museum, CEO of Moulton Company and Moulton’s great-grandson. “It takes you behind the curtain.” 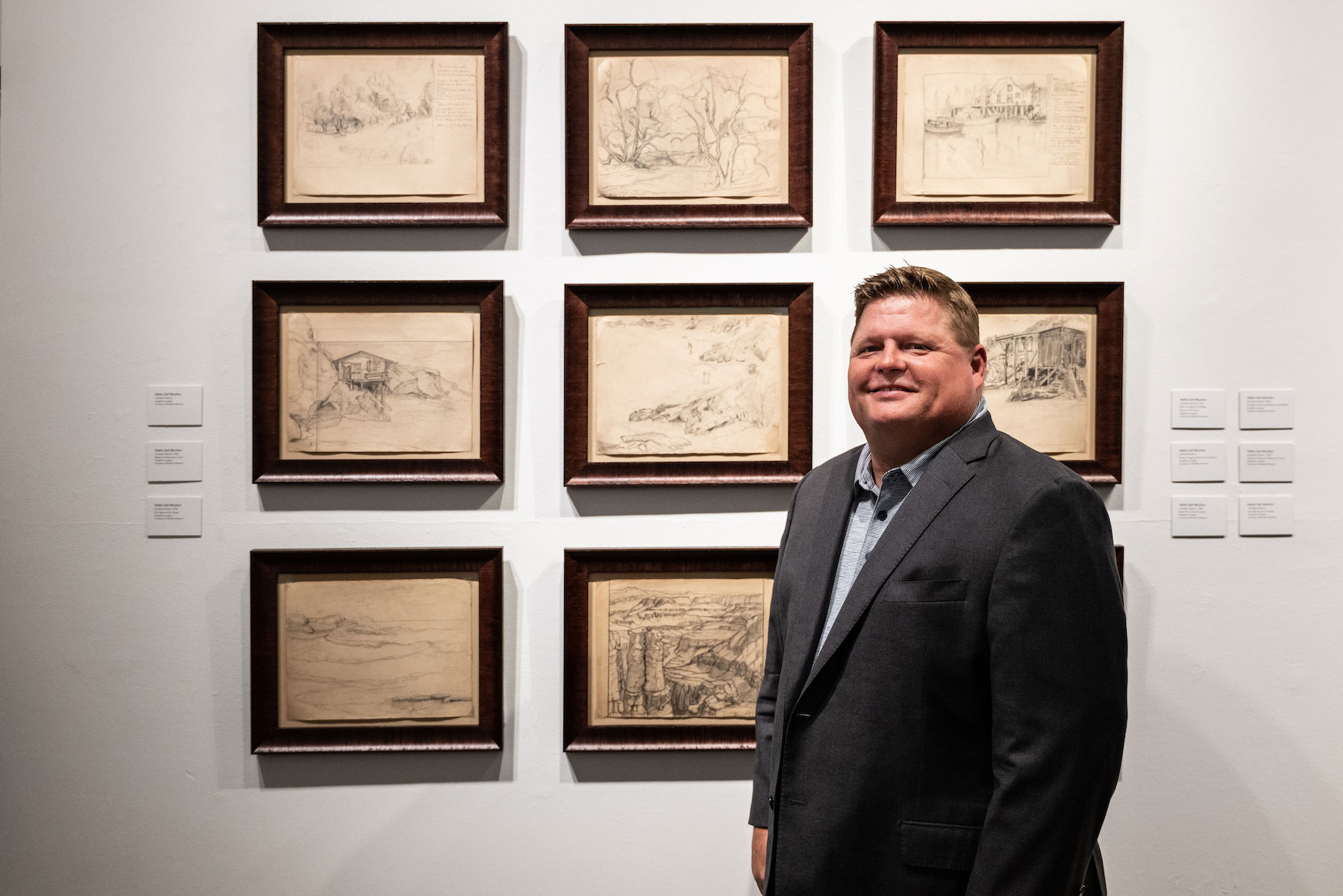 Jared Mathis, great-grandson of Nellie Gail Moulton, with several of Moulton’s many sketches and drawings, which reveal her artistic process

A commitment to education

Moulton was 82 years old when she founded LCAD, contributing the first significant donation to what was then known as the Laguna Beach School of Art. LCAD holds a continuing endowment in her name today.

“I’ve been around the world twice and done almost everything I wanted to do in my 90 years except one thing – go to college,” Moulton wrote in her memoirs. “You wouldn’t think it would still matter, but it does. It’s a bit too late for me to go back, so I established a fund to assure the youngsters in the family, 21 in all, get a proper education. Something I could never afford.”

One of Moulton’s signature pieces, a work titled “Three Arch Bay,” ended up on eBay, erroneously attributed to Edgar Payne. The mistake likely happened because Moulton signed the back of the painting, “With apologies to Edgar Payne,” who was her mentor for the painting. When Mathis discovered the piece, he immediately bid on it and flew to Hawaii to fetch it. 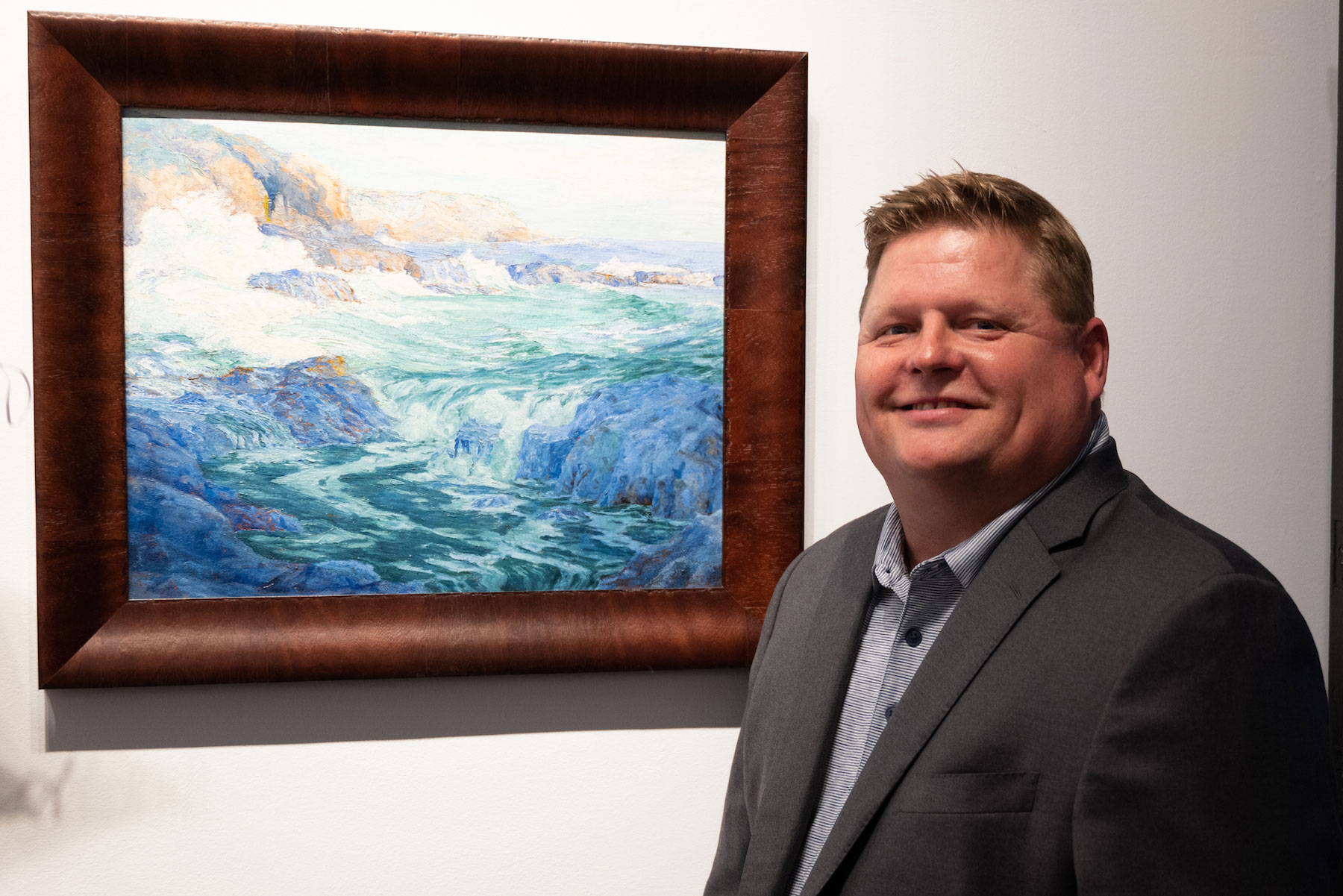 Jared Mathis with “Three Arch Bay” (circa 1925), a piece he accidentally discovered on eBay

Keil said these early 20th century plein air painters were considered the area’s first conservationists. “They captured the beauty of open rolling hills and wide-open seascapes,” she said. In that way, their paintings are not only works of art, but historic records.

“As a little girl, I crossed the midwestern plains in a covered wagon. Last year, watching a thing called television, I witnessed man’s first step on the surface of the moon,” Moulton wrote in her memoirs, two years before her death in 1972. “I have seen so many firsts. The first telephone, the first gaslight, the first use of electricity, the first typewriter, the first bicycle, the first car, the first plane, one of the first women to work in an office.” 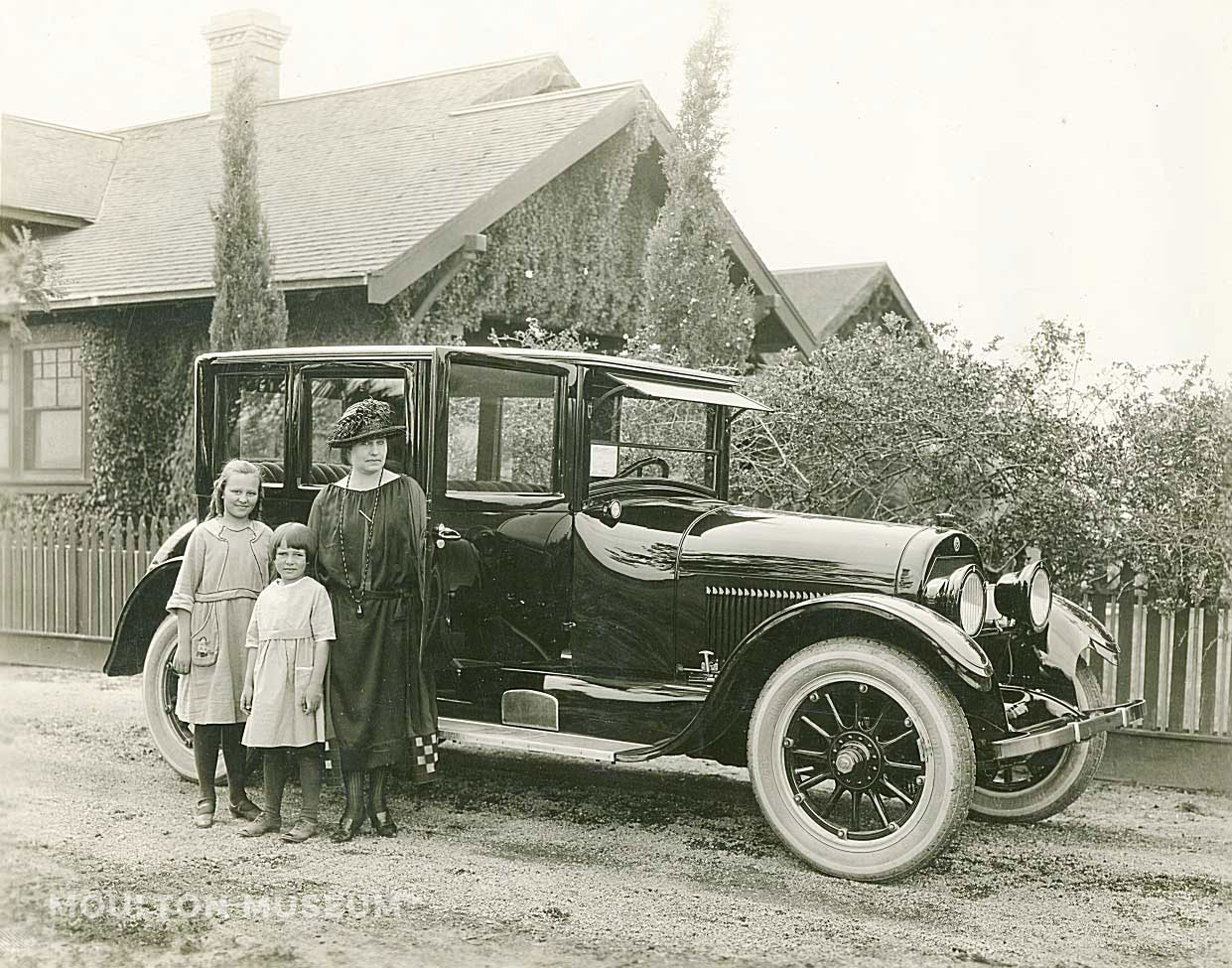 Just imagine how Moulton might have reacted to the next 50 years.

The Moulton Museum plans to exhibit the Moulton family history in an exhibition set to open in July 2022. An additional exhibition of Nellie Gail Moulton’s work is slated to open at Soka University in May 2022 and run through the summer.

The retrospective of Nellie Gail Moulton’s work at the LCAD Gallery runs through November 21. LCAD gallery is located at 374 Ocean Ave., Laguna Beach. The exhibition is free to attendees. Join the LCAD Gallery for a reception for the Laguna Beach First Thursdays Art Walk on November 4 from 6-9 p.m.

LCAD opens The Art of Nellie Gail Moulton Exhibition By LB Indy Staff on November 12, 2021 (Left to right) Cindy Keil, co-curator of The

Lewis Moulton and his horse, Lady

Lewis Moulton and His Horse, Lady Lewis F. Moulton with his mare, Lady. By JANET WHITCOMB | Orange County Register August 8, 2015 at 5:55 p.m. He