“A stagecoach is a type of horse drawn coach for passengers and goods. They were one of the first forms of organized public transport and originated in the 1600s in Great Britain. Before railways were invented in the first part of the nineteenth century they were the fastest way to travel long distances. Stage coaches were operated across Europe and North America.

The coach would travel between stops called stages at which passengers could obtain food and drink and the horses that pulled the coach would be changed for fresh ones. Regularly changing horses meant the coach could travel much faster than other vehicles. They were mostly of light weight construction which also allowed them to go faster. Their speed meant they were used to carry mail and often called a mail coach.”

According to Britannica Kids, “In the United States, coaches were the only means that many people had to travel long distances over land. In 1802 travel in numerous coaches between Boston, Massachusetts, and Savannah, Georgia—a distance of about 1,200 miles (1,900 kilometers)—cost about $100, including travel and lodging. In England, in 1828, coaches ran 12 times daily from Leicester to London alone. They were also very quick; the London–Edinburgh (Scotland) stagecoach traveled its 400-mile (645-kilometer) route at an average speed of 10 miles an hour (16 kilometers per hour). Gradually, after the 1840s, coaches succumbed to the railroad, although they continued to be used in less accessible places into the 20th century.”

California State Parks invites you to learn about the history of stage lines to California. Learn about travel before automobiles. “You can also find out about the state parks and museums where you can see the original stages, that once traveled the dusty roads of California in the 19th century. 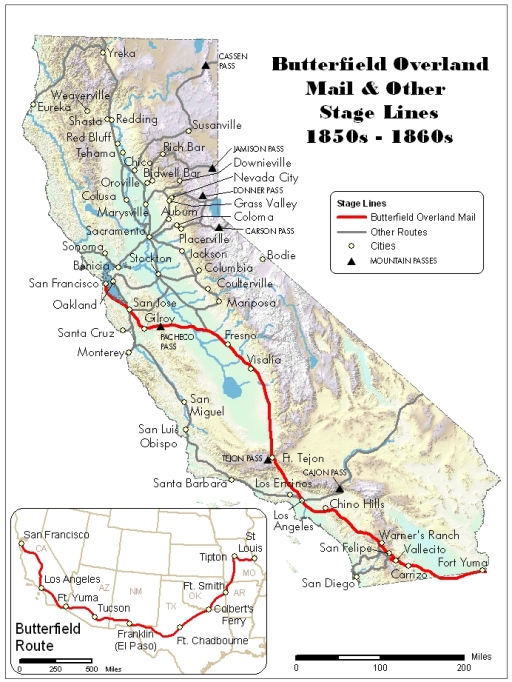 Learn about the amazing feat of the Butterfield Overland Mail Stage. The stage operations, which began in 1858 between St. Louis and San Francisco, revolutionized mail and passenger service. Traveling 24 hours a day, the 2,800-mile trip took an unheard-of 25 days! The stage line forever changed travel and mail transportation.

In 1857, the first transcontinental mail delivery service, offered by the historic
San Antonio and San Diego Mail Line, made its 1475-mile journey between those two points in 52 days. More than a thousand miles longer, the Overland Mail Stage cut that time by more than a half.

Find out how operating a stage line was a risky business, as well as a moving experience for passengers. Every station stop was an adventure and there were always stage road hazards to overcome.

Read Mark Twain’s observations on the stage company hierarchy and revisit some of California’s most famous Jehus or stage drivers. These whips drove more than the classic Concord stagecoaches seen in the movies.
See history come alive at the Vallecito Stage Station (video) on the San Antonio and San Diego Mail Line. 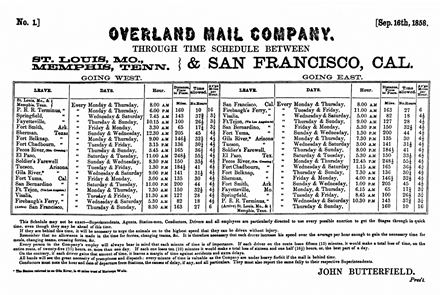 The first stagecoach started out from San Francisco on September 14, 1858, at ten minutes after midnight. This was John Butterfield’s time schedule that set the goal for the time of arrival at each “timetable” station. The average distance between them was about 160 miles.

The driver on the eastbound stage would meet the driver of the westbound stage at a timetable station and they would exchange mail and passengers and turn back. This way each driver and conductor became intimately familiar with his section of trail. As the stages traveled twenty-four hours a day without stopping for sleep, a single driver who drove a stage the entire 2,700 mile distance in twenty-five days would have to stay awake for the entire time–an impossible task.

No more than twenty minutes were allowed to stop at a station. There were 100 stage wagons distributed to the various stations and no single stage completed the entire journey.
John Butterfield was a strict disciplinarian. In the fine print at the bottom, he outlines his requirements for meeting the schedule. He notes how much total time would be lost if each driver took ten minutes more than he should at each station. According to the contract, if the mail was not delivered in twenty-five days between the eastern and western terminus, a fine would be levied on the company.  View and download Overland Mail Company Timetable

My name is Tim Pryor and I am the Studio Director of ArcanForge, a small boutique digital media experience company focused on the experimental side