Moulton Museum has a yearly exhibit in our main gallery and a quarterly rotation in Nellie’s Gallery. See our displays that showcase art and history in the context of Moulton Ranch. Ask us about our artist-in-residence program for Nellie’s Gallery. We will be partnering with local artists starting in 2023.

1874 was a historic year for the nation. It marked the opening of the Southern Pacific Railroad, General Custer led an expedition, the patenting of barbed wire and Levi Strauss and Jacob Davis jeans. The QWERTY keyboard was first used by Remington typewriter. 1874 was also a significant statewide year in Orange County history. Back East, Lewis F. Moulton decided to leave home at twenty years old on a daring adventure to California. His future business partner, Jean Pierre Daguerre, journeyed to California as a French Basque sheepherder. It was not an easy journey during those times as it required many forms of transportation. Lewis ventured into the west as an eager and formidable businessman. Join us as we chart this adventure in our exhibition with interactive stations and film!

The Nellie Gail Moulton Exhibit features her sketches and paintings in Nellie’s Gallery. This series of conserved fine art has been on a traveling exhibit with our partners. It will be on view to the public until December 31, 2022. We have a artist-in-residency program. Please inquire for details.

An avid en plein air painter, Nellie belongs to a larger movement of female artists who have recently gained significant recognition for their contributions to the arts. Nellie created art throughout her entire life and studied with renowned artists such as William Wendt, Anna Hills, Frank Cuprien, and Edgar Payne (also showcased within this exhibition). Her work captures the rich beauty of nature, expressing her keen eye for detail and impressive use of color.

The multi-disciplinary Aliso Viejo Ranch project. It preserves and restores historically significant buildings, artifacts and farming implements from the 1800s and highlights the importance of the agricultural past of Orange County, the state of California and Western United States while demonstrating the future of sustainable agriculture and aquaponics.

“The vaquero on horseback amid cattle brands display, is currently hanging on the feature wall in the Civic Center lobby, depicts the raising and branding of cattle, which was prevalent during the rancho period. Framing the display are branding irons from many famous historical figures, including Mexico’s last governor Pio Pico; Don Juan Avila, a former owner of vast amounts of land during the rancho period; and the branding irons of South Orange County historical icons Lewis Moulton, Richard O’Niell, Dwight Whiting and James Irvine.”

Through the Eyes of a Pioneer Woman: Nellie Gail Moulton

We are taking reservations for our traveling exhibitions such as The Art of Nellie Gail Moulton. Please request to speak with our curatorial team so that we can schedule our collection at your facility.

The Art of Nellie Gail Moulton

Who was Nellie Gail Moulton? Pioneer, Artist and so much more 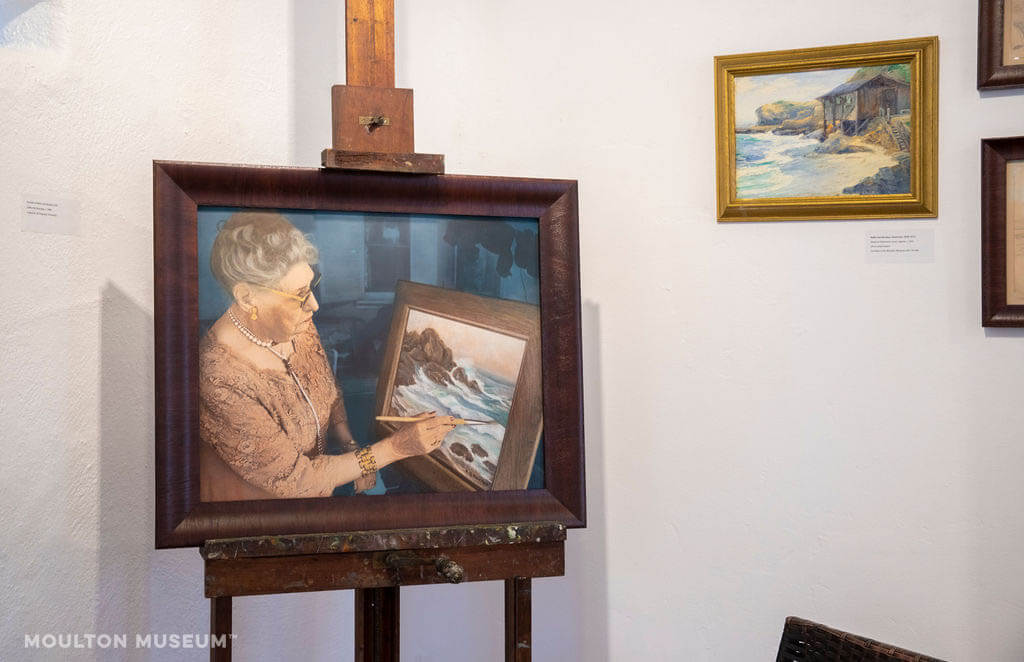 Closing Reception: Friday, November 13 @ 6-8 PM
Free! (RSVP Required)
Join us for the closing reception for Who Was Nellie Gail Moulton? Pioneer, Artist and so much more with complimentary wine and a performance by Jeremy Green.
Who was Nellie Gail Moulton? is underwritten by the Historical Collections Council of California Art with support from the Moulton Museum

The exhibition featured 40mm film from a 1940s Moulton Ranch roundup and oral histories with the family. Historic images were displayed in the lobby with artifacts. Oversized map from the 1970s showcased the change-over-time since the ranch was sold to developers. Leisure World was one of the first communities developed from Moulton Ranch.