WE STRIVE TO GROW OUR HERITAGE, COMMUNITY, PHILANTHROPY.

Our core values are reflected in our archives, exhibits, educational programs, and partnerships.

Our Partners and Sponsors

We provide historical materials and fine art to our partners throughout California.

The site will feature hands-on community educational programs on sustainable farming operations and will provide an opportunity for onsite STEM, biological science, horticultural and urban educational classes and community programs, farm-to-table dinners and special events. It will showcase Orange County’s development – from its agricultural roots to becoming the world’s 45th largest economy – and highlights the agricultural history of the United States.

Follow the project development by visiting our site’s webpage with more info.

Ranching and agriculture are central to the identity of the Moulton family to this day.

In these times, family and friends are more important than ever. For over a century, the Moulton family has been gathering, working their cattle and building community just like they used to do on the Moulton Ranch during the ranching period of Orange County. At Moulton Museum we hope to tell the stories and share the traditions that bring us all together, connect us to our past and keep our community spirit alive into the future. Enjoy the video from our latest round-up held in Maxwell, CA in 2020.

Watch our 10 minute film about this historic event.

What is a Roundup? 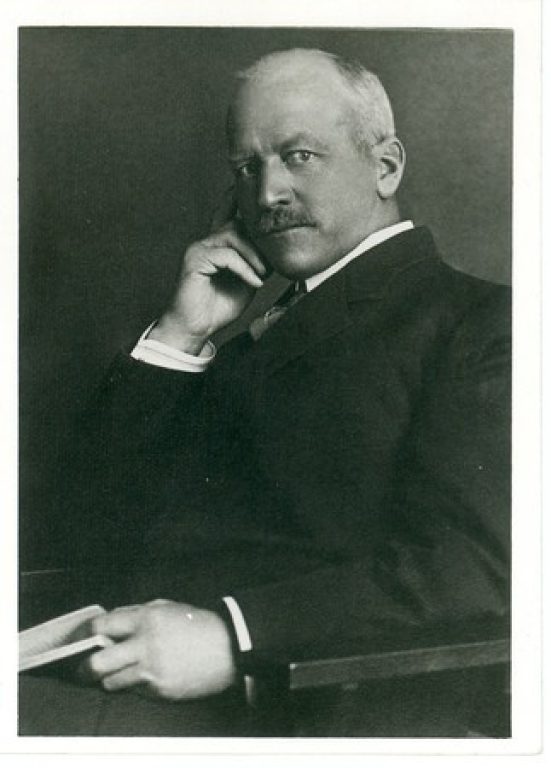 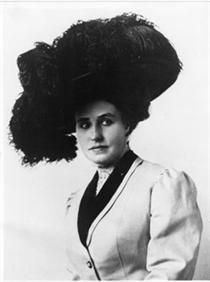 The Moulton Ranch was established by Lewis Fenno Moulton. He was a prestigious lawyer’s son. His father was a classmate and friend of President Lincoln. Lewis had worked at old Daniel Webster farm as an adolescent. As a part of Western expansion, many young men ventured West for opportunity. Lewis traveled to California at twenty years old by a boat around the Isthmus of Panama, train, and another boat to San Francisco before landing in soon to by Orange County. He learned to run a ranching operation by working at Rancho San Joaquin starting in 1874.

According to Louise Moulton Hanson, “In 1881 he bought Jonathan Bacon’s band of sheep and rented his 1,600 acres.” Lewis F. Moulton and Company was established with Jean Pierre Daguerre, a Basque sheepherder. The would developed a sheep and cattle enterprise along with agriculture.

Throughout the years, Lewis purchased 21,723 acres which became the Moulton Ranch. Today, the land comprises much of Laguna Niguel, Laguna Woods, Laguna Hills, Laguna Beach, Dana Point, and Aliso Viejo. We aim to work with these cities to provide them with their heritage and preserve the past. Together we can educate the communities by exhibiting their history at the Moulton Museum.

Subdivided in the early 1960s from the Moulton Ranch Incorporated: December 20, 1991

Witness History in the Making

The Moulton Ranch Center mural depicts the history of Laguna Hills in a large, immersive mural painting that combines maps and photos from the Moulton Museum archives. These images are taken from the Moulton Ranch into an original artistic composition by Tim Smith, LCAD. View Orange County history through art in Laguna Hill’s first mural project! We hope you can experience the mural in person at 23272 Cabot Road in Laguna Hills. Please visit moultonmuseum.org/mural and follow us on social media for more content, details and upcoming events. 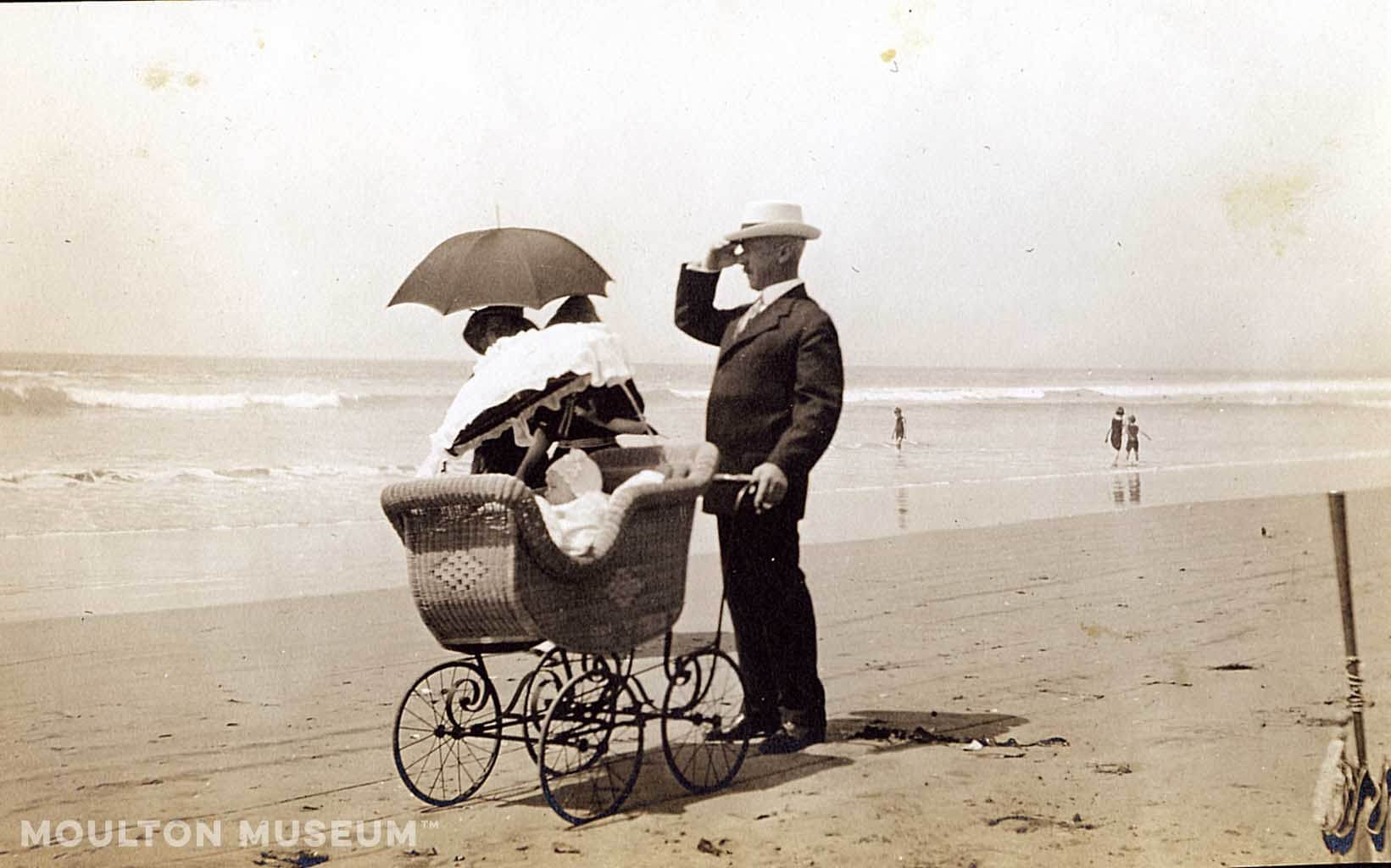 Greetings from Moulton Ranch! We look forward to seeing you in 2021. We will be opening new exhibits and sharing the history of Orange County’s … 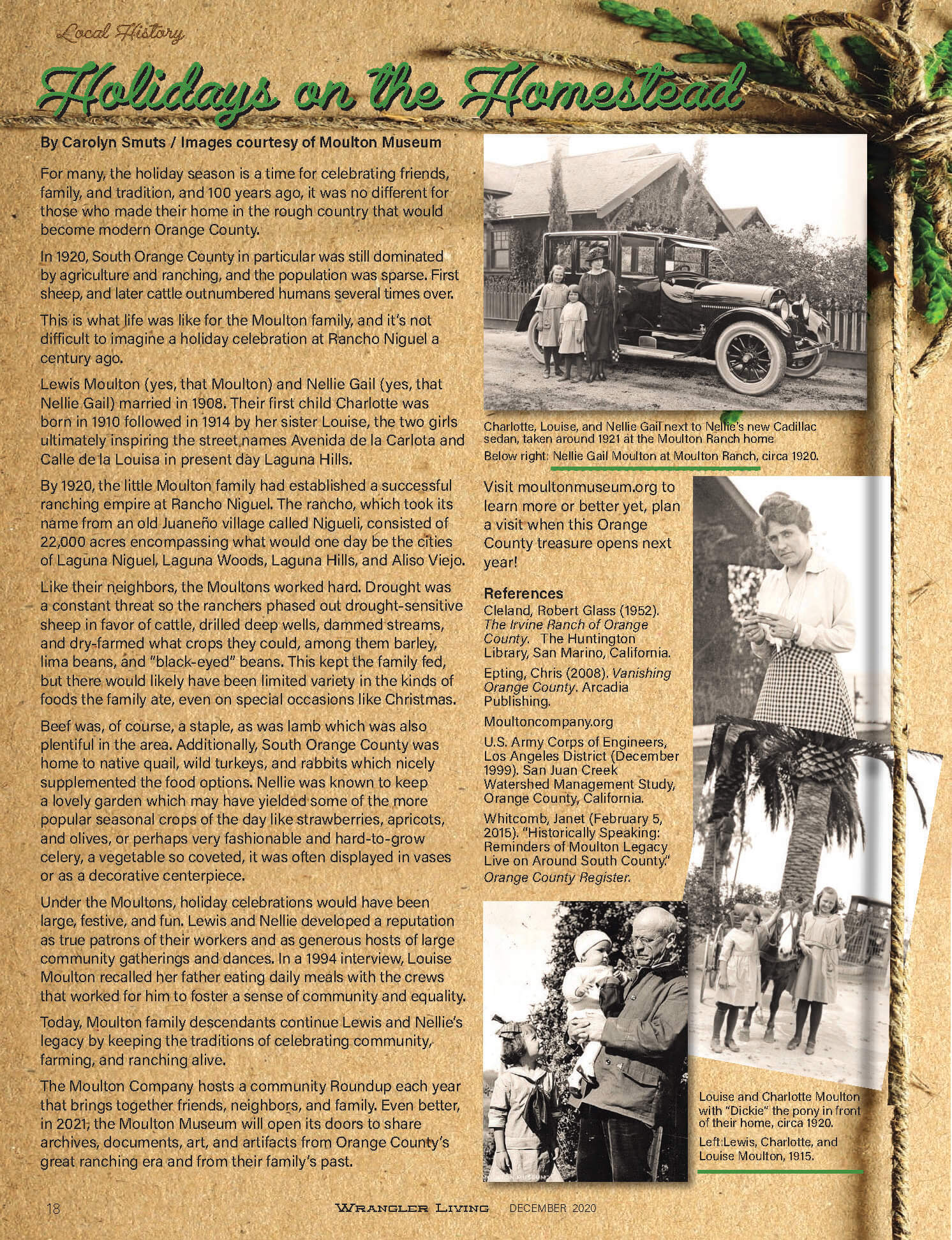 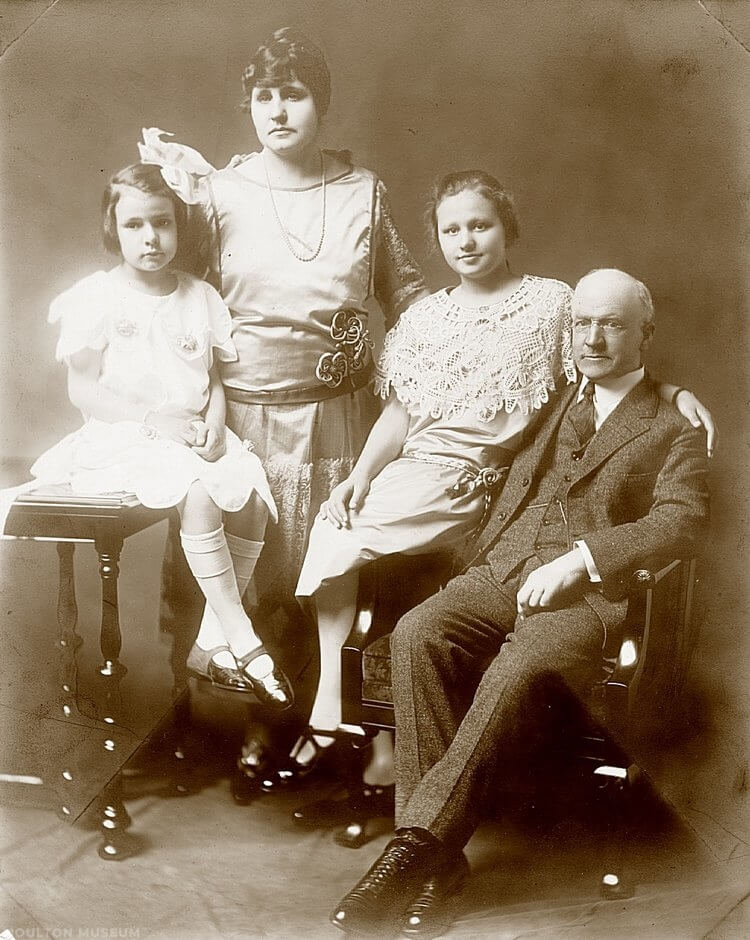 Happy Holidays! We hope you enjoy the holiday season. We are reflecting on the entire year which began with the commissioning of the Moulton Ranch … 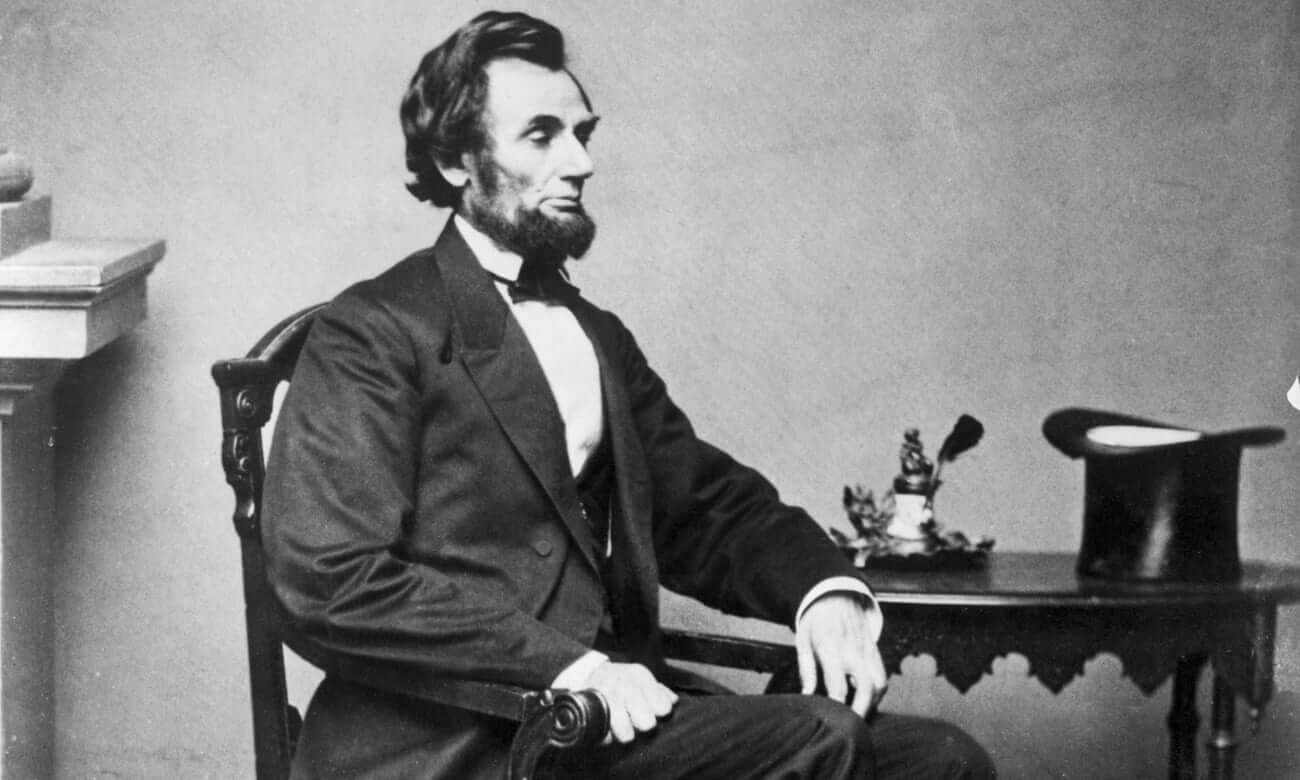 Happy Thanksgiving! “The year that is drawing towards its close, has been filled with the blessings of fruitful fields and healthful skies.”-Abraham Lincoln, Proclamation of Thanksgiving, … 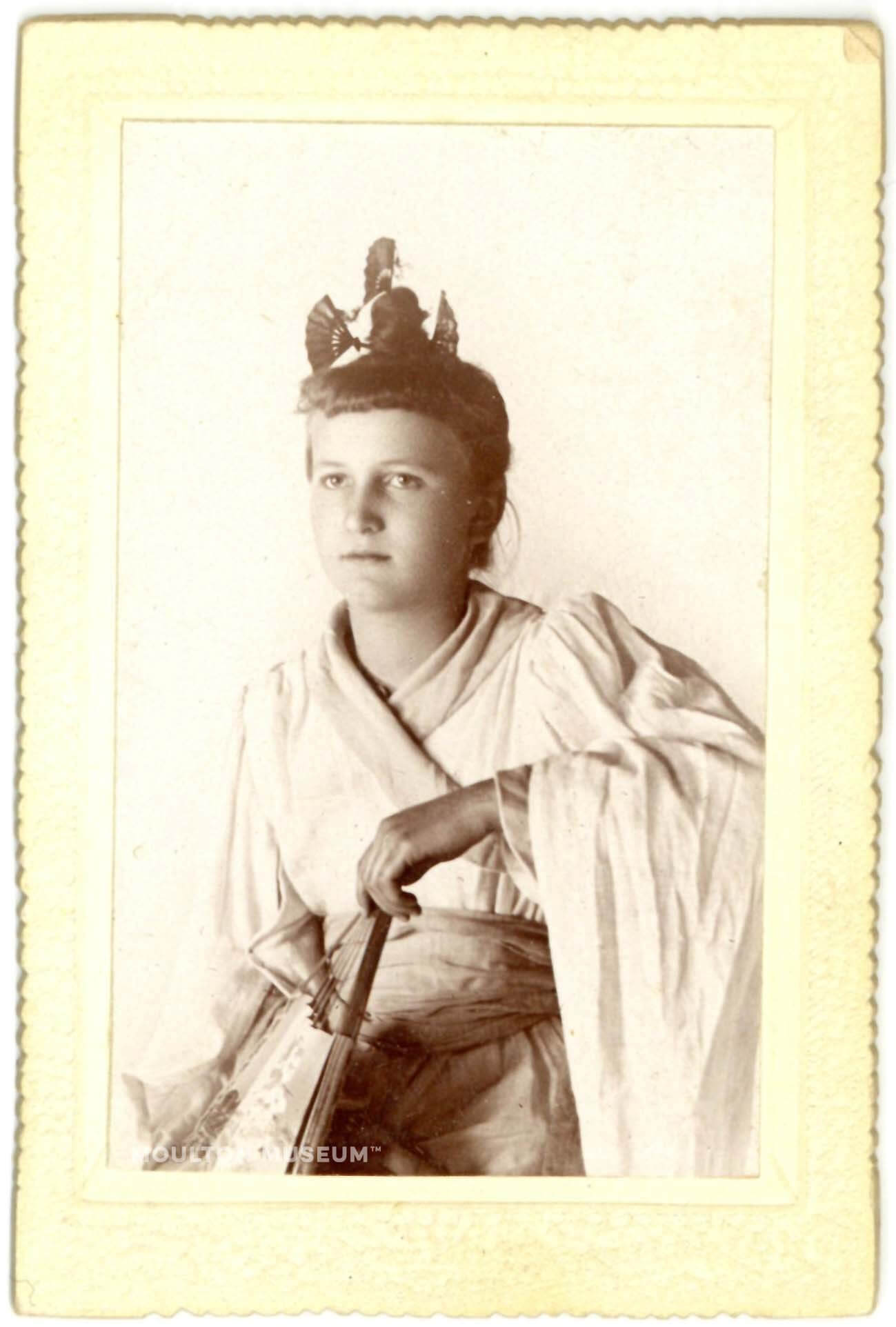 Happy Fall Equinox! With the official start of fall, we hope these historical images from past harvests inspire your own local celebrations. Take a look at …

We are here to help you 7 days a week and respond within 24 hours. Plus, you can find most answers to your questions right on FAQ page.

Let us know if you’d like to schedule a visit.

Moulton Museum, a 501c3 non-profit works to keep the history of Orange County and its ranching era alive. We have a team that actively archives, restores, and preserves Orange County historical artifacts.